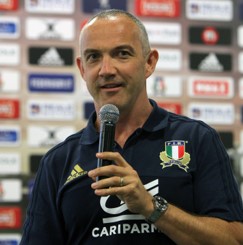 As Director of Performance Rugby for the RFU, O’Shea is responsible for the leadership, management and strategic direction of professional rugby in England. With the aim to support long-term sustainable success at international level.

Prior to joining the RFU in January 2020, O’Shea was head coach of the Italian men’s national rugby team since 2016. The former Ireland international, with 35 caps to his name, was previously director of rugby at Harlequins.

As a player O'Shea played fullback for Ireland between 1993-2000. He played for Lansdowne RFC and Leinster before moving to England to play for London Irish in 1995. He made 127 first-team appearances for the club, scoring 412 points and 62 tries.

In week 4 of the challenge, we focus on the theme of Leadership & Inspiration. Join Alan Ennis in conversation with Noirín O’Sullivan & Conor O’Shea as they take an in-depth look at leadership styles and authenticity, with a firm focus on leadership in challenging environments. Hear from Conor during the w/c Monday March 8th.